The Middle East is currently ablaze with a variety of conflicts. A civil war is raging in Syria, in which already hundreds of thousands of people died and millions of people had to flee from their home. On and across those borders, ISIS wages war on both Syrian and Iraqi territory. In Libya the situation has deteriorated into a civil war. Then there is the seemingly never-ending conflict between Israel and Palestine affecting all other conflicts.

All the relationships between these players in the Middle East create a complex web of friendships and enmities. For example, Israel supports an Iraqi Kurdistan, as do the US and the UK. At the same time, NATO ally Turkey is not too happy with an independent Kurdistan. Pakistan is friends with both Saudi Arabia and Syria, while Saudi Arabia positioned itself against Syria. Qatar is also supporting the Syrian opposition similar to Saudi Arabia, but was also supporting the Egyptian Muslim Brotherhood, contrary to Saudi Arabia.

It is rather difficult to make sense out of this intangible web of international relations. Fortunately, the relationships between these countries have been mapped at Information is Beautiful by David McCandless, although it is not completely current (it seems last updated somewhere in the summer of 2014).

In order to understand the conflict a bit better, perhaps some power blocs exist, i.e. some groups of countries that are mostly friends, with conflicts running across. I took the data from Information is Beautiful, which details for each pair of relevant parties whether they are enemies, whether their relationship is strained, or whether they are friends of even allies. I’ve created a network out of this, with respective weights of -2, -1, 1 and 2 in igraph for python. I’ve developed a package for community detection that can also be used if there are negative weights in the graph. However, the Constant Potts Model (CPM) doesn’t need any special treatment when negative weights are present , and we can simply use it immediately. We use a resolution parameter of 0, which ensures that the average relationship within groups is positive (friendly), while the average relationship between groups is negative (hostile).

When we do this, we obtain the following partition 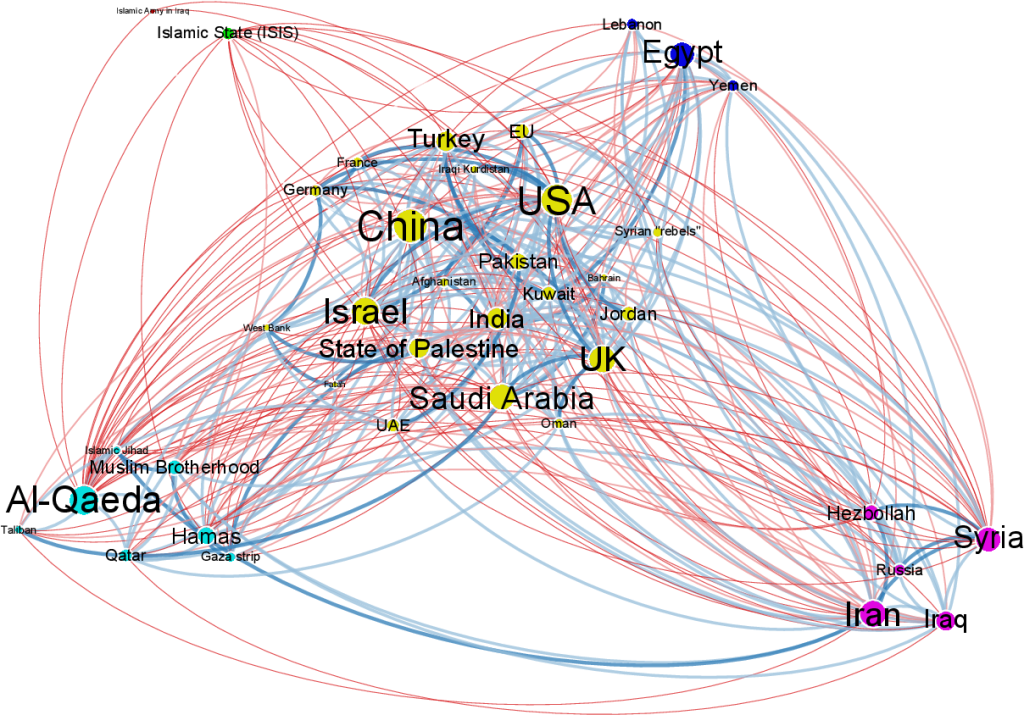 The largest cluster consists of the Western countries and regional allies, which surprisingly also contains both Israel and the State of Palestine (and also Fatah). The second largest cluster contains many non-state actors such as Al-Qaeda, Hamas, Islamic Jihad, the Taliban and the Muslim Brotherhood, which seem mostly tied to Qatar as the only state in that cluster. The third cluster groups together well known allies Hezbollah, Iran, Iraq, Russia and Syria. Egypt, Lebanon and Yemen are also clustered together. Finally, both IS and the Islamic Army in Iraq (a Shia militia) are isolated and don’t have any allies.

Note however that this partition is not necessarily always the same, and can differ from run to run (because some parties straddle the boundaries between clusters). Calculating how often the countries end up in the same cluster, we obtain the following figure: 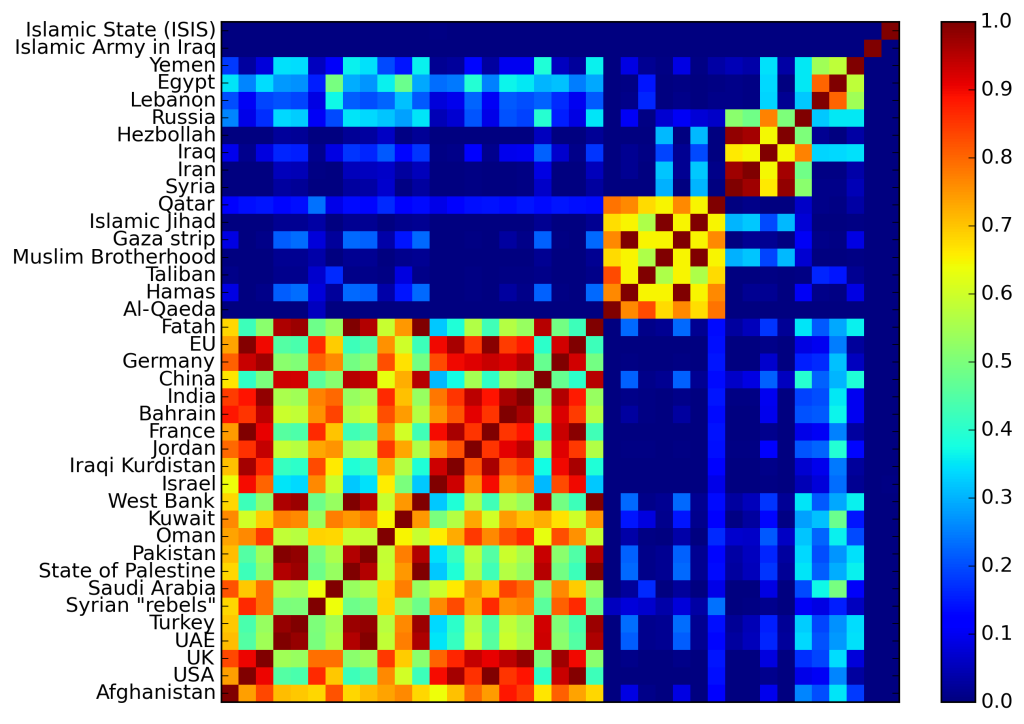 Indeed there is quite some variation, especially in the largest cluster which may show some different results. Nonetheless, the other clusters seem quite consistent, but they may contain some core of stronger allies. Still, members from the different groups are almost never clustered together. It thus seems that the complex web of relations can thus be reduced to roughly 4 groups (and two isolates), which is a bit easier to understand. Nonetheless, the situation remains quite complex and volatile.

According to a sociological theory known as social balance, networks tend to become more balanced, meaning that friends tend to share the same friends and enemies, while enemies have different friends and enemies. The idea is similar to the old adage of “the enemy of your enemy is your friend.” There have been various models suggested for how such a social balance may come about. We here follow the model we’ve developed . The idea here is that parties that have a similar position tend to become friendlier, while those who differ become more hostile. We can also do this for the network here, and let it run until it converges (actually, it goes to infinity, but the sign of the matrix converges, but these are technical details). The dynamics of the process look like this: 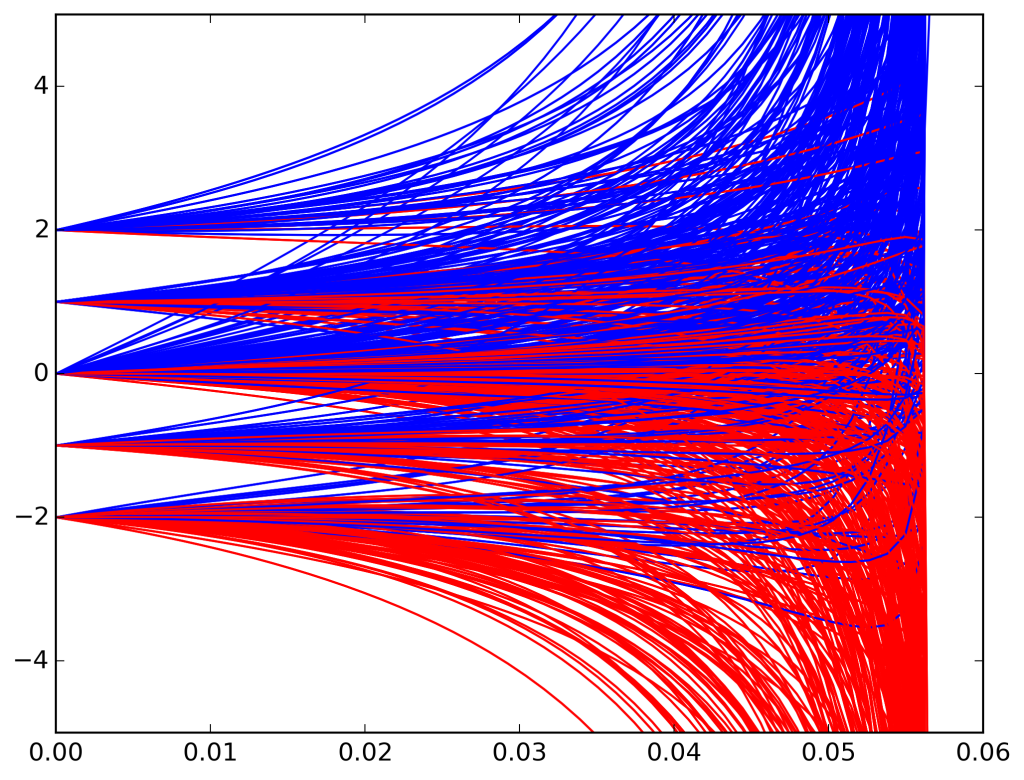 Here, the x-axis denotes the time, while the y-axis is the value of the relationship for each pair of countries (which starts out at -2, -1, 0, 1 or 2). The lines are coloured according to their final sign: blue for positive and red for negative. Notice that, even though some relationships start out positive, they may become negative, and vice-versa, some relationships start out negative but may become positive over time. We’ve proven that these dynamics (almost) always converges to a so-called balanced state: it can be neatly divided into two groups, where both groups are hostile towards each other, but friendly towards their own group. A warning is in order, before the results are over-interpreted: it is not known whether these models are predictive or not.

In this case, the dynamics converge to the following two groups:

The first group contains most of the non-state actors, including Al-Qaeda, Hamas, Hezbollah, Islamic Army in Iraq, Islamic Jihad, Islamic State, Muslim Brotherhood and the Taliban, which would be supported by Iran, Iraq, Pakistan, Russia, Qatar, Syria and Yemen. The other group would consist of the Western countries and the other Arab states. This is not the most optimistic perspective, since a concerted conflict between these two groups would be devastating. But we shouldn’t draw too many conclusions from this analysis. There are still many uncertainties, and results may differ for slight deviations in the initial conditions. We’ve just used relatively arbitrary weights for constructing this network. Also, the assessment of the relations may not be accurate, and they are definitely not up to date. Finally, I re-iterate, there is nothing yet known about whether this model (or other models) are actually predictive. We should therefore research these models and questions more. Nonetheless, we may obtain some insight by analysing the Middle East relationships from this perspective. Although it may seem unrealistic, let’s keep up hopes that the situation improves.